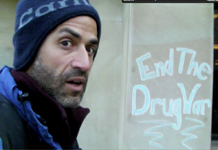 My name is Gabe Rivera.

I attended Indiana University from 1990-92
in an attempt to get an Environmental Science Degree
and quickly learned that our Universities
have no interest in 'Saving Mother Earth',
more so the opposite.

So I retreated to Oregon and read
history, sociology, psychology until
I figured out how to defeat the system,
and then I came back out fighting.

I have been dealing with local police, Judge,
politician and Reverend persecution for the past 10 years
by the the 'Occupy' folks and other 'interests' of
maintaining prohibition such as the AMA, DEA, CIA, FBI, etc...

In 2009 I released an album
The Goddess vs The Drug War
that succinctly covered the ritual dyfunction
that is the drug war and how to solve it
in hopes of preventing all the murders
that happened in the meantime.
Ideally this website will do a better job.

Hopefully I can convince humans of their potential
to 'end the drug war' today
as it's the only way to
Save Mother Earth.

I appreciate you making it to this site,
as this is the potential to 'end the drug war' today,
which is vastly achievable.